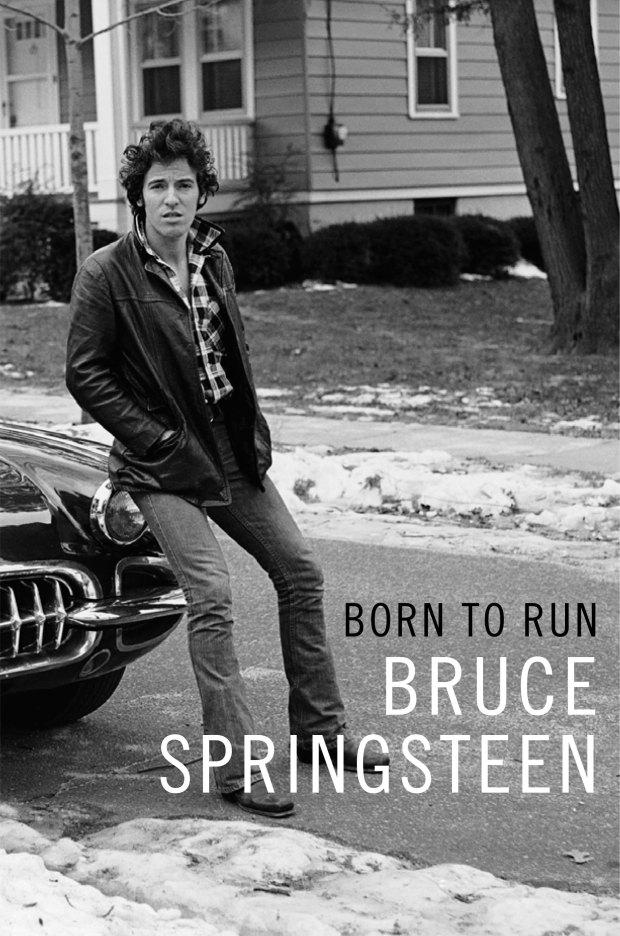 From the cover of the autobiography, photo mid 70s.

I discovered the music of Bruce Springsteen late. I had a dim awareness of the album that changed everything – Born To Run – while in junior high. And my prep school roommate was a Bruce-head, so I heard most of the catalogue up to The River through him – a guy named Bruce Marshall, now deceased. But roommate Bruce rarely played the first two albums, and I didn’t discover those until I began to work my way backwards through his music from the album that finally galvanized me – Born In The USA. From 1986 through the mid nineties The Boss was on regular rotation on my turntable, cassette deck and whatever car music situation I had (no internet then, kids.) 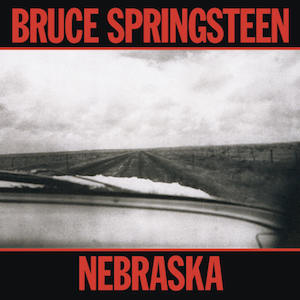 With the exception of Nebraska, which I heard as a kind of beautiful, lonely nightmare, I was all about the exultation and masculinity of his music. But gradually, as I aged I began to connect to something underneath the power cords and shouted choruses. His songs became little plays to me, and I discovered the characters in them were complex, contradictory and haunted. I unearthed the father story being told, from various angles and in various tones of heartbreak. I recognized the longing for a love that lasts, not as a Top 40 lament, but as a searing and repeating dysfunction. Through the 90s, Bruce moved from being a god-like rock icon to me, to a personal storyteller and party maker.

I stopped collecting his music after Nebraska. In the early 90s I was in the midst of my own myth-making and self-destructive New York story, then I moved and started a family. So I was preoccupied. And the romantic musings of Tunnel of Love left me disinterested. It wasn’t until The Rising that I felt the urgency of his call again. I had seen him live once in the 80s – as part of the Amnesty International tour in Philadelphia (in the JFK stadium that doesn’t exist anymore.) After The Rising, I began trying to see him live as much as possible, and in the last 15 years have seen him and the E Street Band four times, all in Philadelphia. The last time I saw them was Jake Clemons’ first tour, and – I might have this wrong – but I believe I saw the show in which Jake played his uncle Clarence’s solo on Jungleland live for the first time. 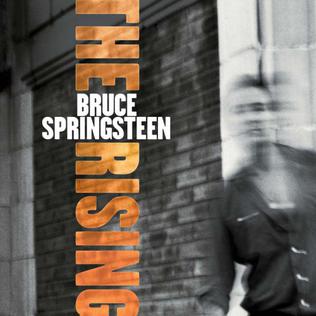 Since The Rising I have done what most musicians hate – I have picked the songs I like from his various albums for my digital collection, rather than download the whole album. I read Peter Ames’ bio Bruce two years ago and enjoyed it. And yet, it felt a little . . . clinical. As if I was studying this phenomenon known as “Bruce Springsteen.” Large swaths of his life and his creative process opened up to me, and it was fascinating to read about The Castiles and Steel Mill, his earlier groups, and the raggedy cast of characters which evolved into the greatest rock n roll band on earth. But my personal connection to him remained through the music. And as an artist myself, I knew that connection was veiled by his songwriting, and my subjective response to it.

This past Christmas I was given his autobiography, Born To Run. I knew then it would be a while before I read it. So when I planned a week away for me and my kids this summer, Bruce came with me. 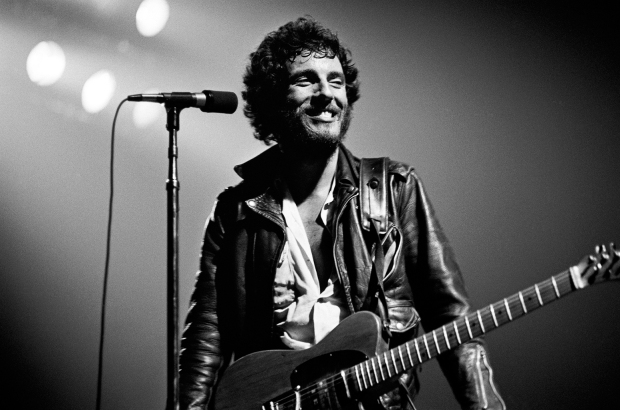 Bruce, circa the Born To Run album

The book is as personal and as familiar as his songs. This past week, I have felt as though the man himself dropped by on his Harley, and told me the story of his life while we played a little pick-up Whiffle Ball. The portrait he paints of his family of origin is heartbreaking and heroic. The story of his relationship with his dad, described as central in the Ames book, becomes in Bruce’s words painful to read, and riveting. The heroism of his mother, and perhpas her masochism, is rendered directly and passionately. The Catholicism hovering over the family like a suffocating and protective bird surprised me – an aspect of his life I missed from the Ames book. The way all of these precious lives, and the lives of the imperfect community of Freehold, NJ he grew up in, the way they led directly to the themes and stories of his music is exciting when you’re reading Bruce tell it. 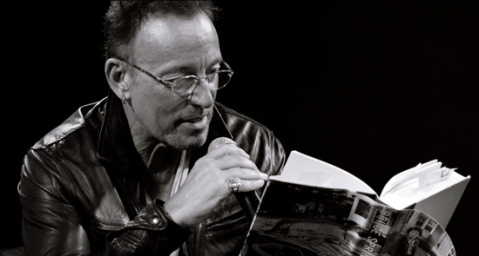 Also described in the Ames book, but dealt with in devastating frankness here, is Bruce’s battle with depression. I think the lasting gift of his autobiography is less the story of his career and family – extraordinary and inspiring stories both. I think the lasting gift of his book is that here we have a man’s man, a blue collar guy, and working class hero talk about struggling with crippling depression, and the effect it had on him and the people he loved. He writes about how it feels, what it makes him do (and not do). He describes in striking detail the places where onset episodes happened, who was with him, what he did next, what he thought about doing, but didn’t.  And in the father-son story beneath and around it, he writes about the way these illnesses, addictions and plagues travel generationally through families, as it did in his. It is a testament to his human compassion and skill as a writer that the man you come close to loathing in his story – his father Doug Springsteen – you end up feeling sorry for, as he shows you a man who struggled with the same demons his son did, but didn’t have the tools his son had to defeat them . . . or at least, keep them at bay.

I grew up alongside a depressed dad. And while he was not as harsh or drunk as Doug Springsteen, my witness of his depression and the way it seeped into our relationship had a profound effect on me. In my case, I watched as my father clawed himself back from the brink, came to terms with his illness, and got help for it. Unlike Doug, my dad had seen this illness take his own mother’s life, and so the dire urgency of treatment was perhaps more clear for him. In my dad’s struggle I formed template for my own journey through darkness. Bruce had no such template. 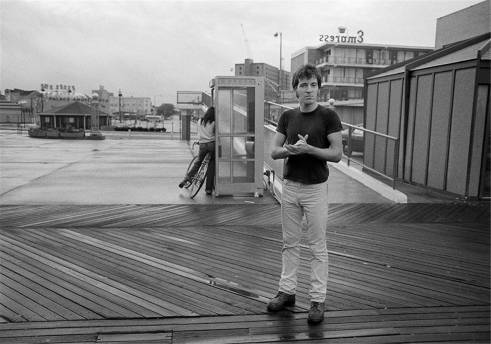 Bruce in Asbury Park NJ in the late 70s.

I relate to him. We’re both creatively narcissistic Virgos, with grandiosity to spare, and the depressive shadow that comes with it. Bruce got a little more of everything than me: talent, drive, obsession, booty, depression and stardom. But in reading his journey, he feels like a guy who had a big idea, worked his ass off in pursuit of it, caught some breaks and took advantage of them, took some hits and got up from them, and knew how to surround himself with amazing people. Bruce paints a self-portrait which is funny, profound, somber and profane, and since putting his book down, I have been feverishly adding missing pieces of his work (and completing some albums) to my music collection.

Over and over, Bruce describes his music as a service, and his salvation in performance. At several points in his story, VIPs are unsure whether or not to back this scruffy hippie/greaser from New Jersey. Then they see him in concert and they get it. Like Shakespeare, what Bruce makes is meant to be performed. And like the Bard, the Boss means to perform it for everyone  – high, low and in between. Sometimes, you discover your heroes have feet of clay, and it disappoints. But for me, Bruce’s feet covered in the earth, the gravel and the shit of his life are anchors. No matter how high you fly, remember your origins, and celebrate them. 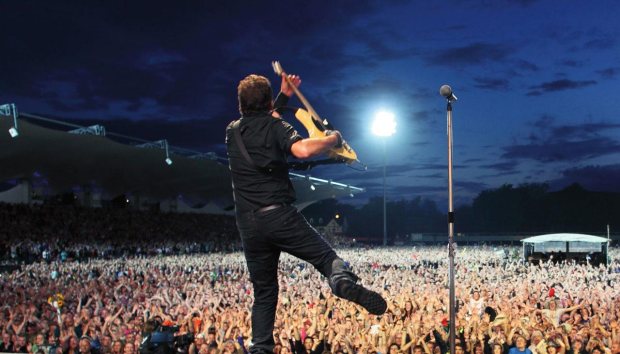 ← Noa 3: The Island of Misfit Toys
The impotence of general outrage →

One thought on “Born To Run”