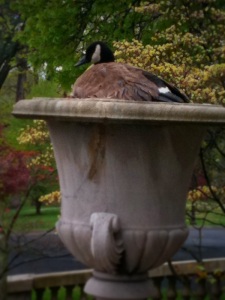 Mother Goose at the Elkins Estate

My encounter with Dzeici began this afternoon at the Elkins Estate. They are one of the ensembles in residence there this summer, one of forty-four which applied, and the only group to receive a residency from outside of Philly. They came to the Estate for a tour, to see where ten of them, adults and children, will be living and working from July 22nd to August 1st. I stood under roof of the grand front driveway, observing a lone mother goose nesting atop one of two matching ceramic urns in front Elstowe House. Matt Mitler, founder of Dzeici, drove up in an old Acura with three member of the ensemble: David, Megan and Vanessa.

I recognized them instantly as members of my theatre tribe: wearing consignment chic and carrying the warmth of gypsy theatre people – easy with hugs and genuine smiles. I gave them the tour of the Estate with Amy from the Land Conservancy, and Nora from my Advisory Committee, along with her fiancé Sam. They had the normal jaw-dropping reaction most people do who’ve never seen it in person. “I thought I understood from the pictures on your site,” Matt said, “but it’s so much more.”

Matt and I discovered we shared some lineage in common. Matt’s master teacher was Ryszard Cieslak, Jerzy Grotowski’s principal collaborator. Cieslak came to Yale College in 1983 and gave a bunch of us smart-ass theater majors a two-week workshop in Polish Lab Theater technique and exercises. He blew our little Ivy League minds. I remember him snapping the filters off of Marlboro reds, then sucking them down in two or three outrageous, concave-cheeked drags. He punished us with the infamous plastique exercises. He ordered us to “give birth to something” as a group. This was not a metaphor. “No, really,” he said, “right now. Please. Give birth to something. As group.” Later, he had us come to class dressed in our “fanciest clothes”, with music to dance to. He had us tape paper over the windows so that no light could get in. He directed us through an improvisation in which we were fabulous people, getting drunk on our fabulousness. He turned on the dance music – Prince, I think – and ordered us to dance. “Faster, bigger dancing!” he shouted. We danced like maniacs for five minutes. “Stop!” he shouted. We did. “Turn off lights!” The room was plunged into blind darkness. “Take off all your clothes!” There was a nervous pause, as all of us insecure Yalies wrestled with the certainty that – once we were buck naked –  he would snap the lights on again and expose us all. Then I began to hear the rustle of clothes, and I began to strip in the darkness. I became aware of the fact that I could get away with not stripping completely – but then the thought of being revealed as the only one without the guts to go all the way when the lights went on propelled me. And I found myself totally naked and blind in a room filled with my classmates and one Polish actor, whom I was sure was not playing with a full deck. The rustling stopped.

“Make sure you can find your clothes in the dark,” Cieslak rasped. Then he turned the music back on. “Dance!” he roared, “dance!” And twenty or so Yale Theater Studies juniors and seniors danced the dance of the naked bacchanal on York Street, in the inky dark acting classroom. We jostled into each other in anonymity, hands brushing breasts, penises colliding with thighs, bare bottoms bumping together, and the rich smell of exertion and fear over all. Now, we were all thinking, now he will turn the lights on. We began to want him to, I think. We danced naked in the dark for what felt like an hour, but was likely more like five minutes. He turned off the music. “Go to find your clothes,” he murmured, “get dressed.” The rustle of clothing again. “Everybody ready?” he said, a bit too cheerfully. There was a mutter of assent, and he turned the lights back on. We stared at each other, glistening in sweat, panting, clothes askew. He stared at us inscrutably as he prepared another smoke. We began laughing. The laughter diminished. “Okay,” he said without a trace of humor, “what happened?”

Matt laughed as I told him this story. And he described some of his relationship with Ceislak, much deeper than mine. I was instantly drawn to Dzeici’s application as it described an unapologetic exploration of the connections between theater and spirituality – an exploration I am on myself. Dzeici has inherited and developed this exploration from the Polish Lab Theater and its descendants. This lineage is concerned with theatre as something sacred and transformational – as the actor transforms, so the witnesses are transformed. Around the time Cieslak blew my mind, Grotowski blew my mind on the page. Towards a Poor Theater, a collection of his writing, is still one the few books on theater I have read that changed the way I thought about it. Many of the things that continue to interest me today, including the relationship between religion, ritual, spirituality and theatre, were first articulated for me in that book.

We said goodbye and I told them I would see them tonight at Psalm, a salon-theater in Overbrook where they were performing their production called Fools Mass for one night only. I went home to my family, and watched Indiana Jones and The Last Crusade. Of the four Indiana Jones movies, this one is the most overtly religious, with it’s faux crusade for the holy grail, which caught the blood of Christ as he hung from the cross, and which promises eternal life for those believers who drink from it. Then there’s the father/son relationship in the movie, an obvious echo of the father/son drama in the Gospel. At th end of this Christian Holy Week, it seems I was to be immersed in the Passion.

I arrived at Psalm around 7:50. It’s a converted single family house, in the shadow of St. Joseph’s University. As I approached, someone in what appeared to be a dirty white smock danced out into the street and yammered something incomprehensible at a passing car. This person had very bad teeth and looked filthy. As I turned and walked up to the porch, another person, also in a dirty white garment with bad teeth, but with a wreath of old vines in her hair, growled at me from the hedges. I was greeted on the porch by a “blind man” and Matt as a kind of raggedy hunchback with a cane. I began to understand that these were the Fools of the Fools Mass– a band of grotesque and disfigured retarded people from the middle ages. The group employs expertly applied make-up which makes them look filthy and sickly, and an amazing variety of prosthetic teeth. In a subsequent email, after reading an earlier draft of this blog post, Matt reported that the make-up is actually hastily applied soot and that they made the fake teeth themselves. The effect is unsettling – these are not normal people in any way. These are the outcasts, the kind of people you look away from, the kind of people you send away to homes so that their outrageous oddness won’t bother you. 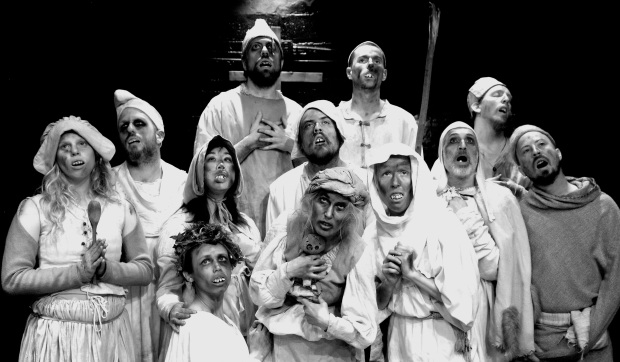 The fools of Fools Mass

The set-up for Fools Mass is simple: the Fools are waiting for their priest to give Catholic Mass, and we have also come for mass. This Priest – Father Jerzy (!) –  is old and sick, and has taught these fools to sing the hymns as he has cared for them. The hymns are actual liturgical music in Latin, French and German. The first “joke” of the evening is that Matt goes to get the Priest, and returns to announce that he has died. The fools are bereft. The rest of the hour is spent watching the fools offer the Mass. There were many funny moments, but not funny in any kind of slick way. Funny in that we witnessed encounters and complications among the fools that had absurd truth in them. Dzeici’s immersion in character is more complete than any acting I have seen in a long time.

There were also moments of great pathos. The ensemble sang the hymns expertly in close, a cappella harmony. They involved the audience in ways that began as comic, but ended up seeming profound. For instance, since none of the fools can read, they needed someone to read the Bible lesson. So they got someone from the audience, a woman of a certain age who made us laugh as she went through a series of glasses from her purse before finally finding her reading glasses. Then she read from Isaiah. The quality of gratitude and attention the fools gave her lent the moment a kind of spontaneous holiness. Later, I was one of several audience members dragged onto the stage to make a living tableaux of The Last Supper. Then the fools sang another Latin hymn when we were all in place, and I found myself humming a harmonic line with them.

But the most moving part of the evening for me was when they were about to offer communion. Two fools, who had established an antagonistic relationship over the course of the evening, got into a fight over the magnificent loaf of bread they were going to use for the Body of Christ. At the hight of it, one fool stabs at the other with a wooden spoon. The fool so assailed protects himself with the loaf, which is stabbed through with the wooden spoon. There was a horrible stillness on stage as all the fools looked at it, and I realized, with a shiver, that here on Easter weekend, when Christians mourn the death of Christ on the cross and then celebrate His resurrection, that I had just witnessed his crucifixion. I’m a Quaker, and I am not drawn to liturgical sacraments. But when the blind fool broke the bread above his head, and the fools staggered into the audience to offer us communion, I was close to tears.

One of the things the Polish Lab Theater sought to do away with were the conventions of the theatre: the curtain call, the dimming of lights to announce the beginning, etc. So with Fools Mass, the fools left us in the “church”, wondering what had happened, just as Ceislak had asked us on York Street, 28 years ago.